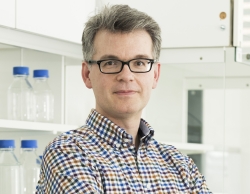 Antoine Peters is Group Leader at the Friedrich Miescher Institute for Biomedical Research in Basel. His group is interested in the epigenetic mechanisms that contribute to the heritability of cell identity of stem cells and during cellular differentiation and that safeguard genome stability. In particular, his group aims at understanding the role of and molecular interplay between histone methyltransferases, Polycomb group proteins and DNA methyltransferases in epigenetic (re)programming in mouse in-vitro systems as well as in pre-implantation and early post-implantation embryos. Towards these goals, his group performs gain- and loss-of-function studies in stem cells, in germ cells in which gene deficiency is induced at specific stages of their development, as well as in pre- and post-implantation embryos conditionally deficient for maternal and/or zygotic gene expression of epigenetic regulators. As functional readouts, the group analyzes the formation and function of heterochromatin, gene transcription, establishment and maintenance of genomic imprinting, nuclear organization, and cell fate.

The group has several collaborations with other groups in Basel and abroad. Antoine Peters is since 2008 an EMBO Young Investigator and since 2014 an EMBO member. He and his group have published more than 65 original publications.

For detail and recent publications: https://www.fmi.ch/research/groupleader/?group=41