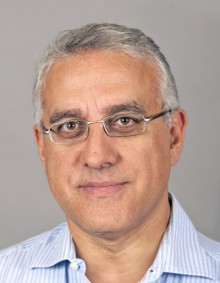 Luigi Terracciano is a Professor of Pathology and head of the Molecular Pathology Division and Chair of Experimental Pathology at the Institute of Medical Genetics and Pathology, University Hospital Basel. After his medical degree, followed by residency in Anatomic Pathology at University „Federico II“ of Naples, Italy, he was a postdoctoral fellow at the Max Planck Institute for Physiology in Heidelberg, Germany. He has a long-standing research interest in non-neoplastic and neoplastic gastrointestinal and hepatic diseases. In particular, Prof. Terracciano has 30 years of experience in molecular pathology, translational research and cancer bio-repositories, as well as high-throughput techniques such as tissue microarray (TMA). The research group of Prof. Luigi Terracciano, has a long time interest in HOX gene function in cancer development. The group screened the entire HOX gene network expression levels in a series of liver biopsies demonstrating that the HOXA locus represents the most prevalent locus involved in hepatocarcinogenesis. Within the HOXA genes, HOXA13 has been identified as the most up-regulated in HCC (Cillo et al, Int J Cancer 2011). The group further demonstrated that the long non-coding RNA HOTTIP, located within the four HOX loci, was also significantly up-regulated in HCC specimens (Quagliata et al, Hepatology, 2014). Their data indicated that the expression levels of these two genes independently predict HCC tumor progression and disease outcome. Furthermore, via the transient modulation of HOTTIP and HOXA13 expression using siRNA, they showed that HOTTIP regulates HOXA13 expression in hepatoma cancer-derived cells and vice versa. In addition, they showed for the first time that both HOXA13 and HOTTIP levels influence HCC cells proliferation rate in vitro. As continuation of the study on the role of HOXA13 in hepatocarcinogenesis, they screened a TMA of 305 tissue specimens constructed in the research group. They found that HOXA13 protein expression increased monotonically from normal liver to cirrhotic liver to HCC and that HOXA13-positive HCCs were preferentially poorly differentiated and had fewer E-cadherin-positive cells (Quagliata et al, Lab Invest, 2018). In two independent cohorts, patients with HOXA13-positive HCC had worse overall survival than those with HOXA13-negative HCC. Over the past 3 years, in a project financed by the SNF, they generated mouse models using using a hydrodynamic tail vein injection (HTVI) model coupled with a transposase system assess HOXA13 oncogenicity (Bianco et al. manuscript in preparation). Half of the mice injected formed tumors demonstrating that HOXA13 overexpression per sein vivo is able to drive tumorigenesis, indicating the role of HOXA13 as a central oncogene in hepatocarcinogenesis. Moreover, both at the protein (IHC stainings) and transcriptomic levels (RNA-seq), they data suggest the capacity for HOXA13 to generate chromosomal instability.

For further details and publications: https://www.unispital-basel.ch/ueber-uns/bereiche/medizinische-querschnittsfunktionen/kliniken-institute-abteilungen/institut-fuer-medizinische-genetik-und-pathologie/lehre-forschung/